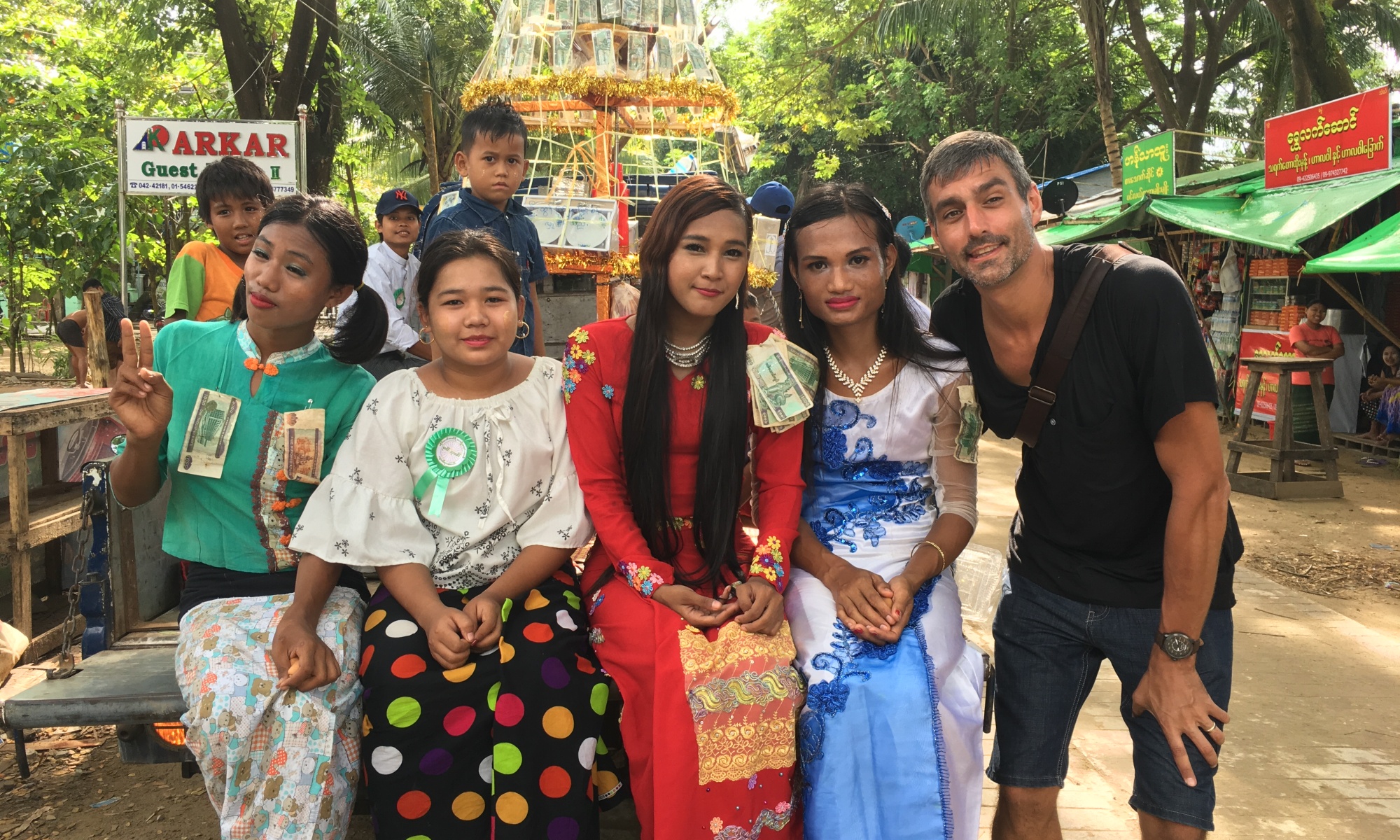 Note: Straight2: ExGay Adventures in Christ will be available May 1, 2021 through this link.

In Southeast Asia’s predominately Buddhist and Hindu countries, there is a belief that some are born a “third sex”. Thai and Cambodian males living as female also refer to themselves as “katheoy” or “ladyboy”.

The vast majority believe in karma, that if one does good, he will receive good in return. Reincarnation is also a widely held belief. Some believe it is “good luck” to have members of the “third sex” around. However, many believe the reason they were born “third sex” is due to sins of the past. Sort of like… ‘Don’t look down on them. Next time around, you could end up reincarnated as a ladyboy as punishment for your bad own deeds.’

To the American / Western mind, this all probably sounds outlandish. But let’s stop and think it through for a moment. How do you believe someone “ends up” identifying as gay? In my experience, there is a widely held American belief that those of us who struggle with homosexuality “chose” it. We chose to be mocked, bullied and ridiculed, to be a castaway.

Reality is that many of us (not all) were sexually abused at a young age. That means a freak raped a little boy. Many of those freaks live seemingly normal lives with a wife and kids. Satan used them to twist the wires. Later at puberty, there was no heterosexual attraction to speak of – only a budding homosexual lust. Men, if that were your story, what would you do through your teens when hormones rage?

Is this a sob story about victims? No, everyone struggles with something. The Lord requires I challenge those who struggle with homosexuality to choose to repent, be born again, follow the Bible, allow the Lord to change them from within, not to allow their temptation to define them. This is difficult truth that few want to hear. If heeded, it will benefit them in the long run. Most would rather hear a pleasant fairytale that aligns with culture and recent civil rights movements. But telling them anything other than Bible truth would be sin… sabotage the Lord’s work and do them a grave disservice (Jam 4:17).

To the church, this is a call to compassion. I repented, committed my life to the Lord and was called. The message I am called to share (Gen 1:27; Rom 1:23-32; 1 Cor 6:9-11) makes me unpopular in today’s Christian circles, as it decreases attendance and revenue. Many (not all) pastors talk down to me (Rom 2:11). If it is happening to me, I know it is happening to others out there.

Not yet a pastor myself, I have respected pastors as God’s anointed and submitted to their authority. Naturally timid, I have taken the call to humility (1 Pet 5:6) to extremes… to a fault. Romans 12:19 has been my excuse not to stand up for myself.

“Now the just shall live by faith: but if any man draw back, my soul shall have no pleasure in him.” Hebrews 10:38

This type of guy has been an easy target for pastors who have forsaken the way and operate in the flesh. Putting new-age psychology training to use, all they have to do is imply that I should feel guilty about something using pious words. For example, ‘I’ll pray that the Lord gives you a heart of forgiveness.’ The few times I have reached my wit’s end and stood up for myself, I have backed out and apologized.

One of Many Examples: A few years ago, I visited a church and clearly shared my testimony with the pastor after the service. There was no confusion around the fact that I had repented and fully left the gay lifestyle, that today I am a missionary, etc. Immediately escorting me out, he strongly implied that I was likely a pedophile and voiced concern for their children.

“Who art thou that judgest another man’s servant? to his own master he standeth or falleth. Yea, he shall be holden up: for God is able to make him stand.” Romans 14:4

“Who shall lay any thing to the charge of God’s elect? It is God that justifieth.” Romans 8:33

I would rather have been beaten with a baseball bat. To me, there is no greater accusation than this. Weak and young in my new life in Christ, I had misapplied 1 Cor 16:22 as meaning that I could not speak up. Bullied in high school, I didn’t realize I was carrying the same mentality with me into church. I would tell myself it wasn’t as bad as it seemed, that I was just paranoid or that it must somehow be my fault. Maybe I had lingering effeminate mannerisms or something??? Even so…

This pastor probably had a bad experience with someone from a similar background. So he jumped to an extreme conclusion and took drastic measures, “I’ve seen this before! GET HIM!”

Suggestion: While it’s wise to be cautious in today’s world… Before presuming the “most likely diagnosis”, give everyone a chance.

Such condescending emasculation can destroy a man. Among those who struggle with homosexuality, there is a high rate of suicide. At the very least, it discourages the broken from attending church… which the Lord requires and is essential for growth. (Heb 10:25)

Now does it sound like I am saying churches should water down the Word of God to accommodate the LGBT or ex-gay? No, that is not what I am saying. Much the opposite… This is a call to difficult truth.

I have met more cowards in positions of church leadership than I ever met in the gay bars. (Rev 21:8) When Rebekah and I got married, pastors counseled me to “submit” to my wife, to “follow” her. This “Mutual Submission Doctrine” is a perversion of Ephesians 5:22-33 (and an arsenal of corroborating passages – Gen 2:18, 3:16; 1 Tim 2:11-14; Titus 2:3-5), wherein God orders wives to ‘submit to their husbands in everything as unto the Lord.’ Plain as day… So why?

“Beware lest any man spoil you through philosophy and vain deceit, after the tradition of men, after the rudiments of the world, and not after Christ.” Colossians 2:8

At age 38, I never had a significant attraction to a woman until I met my wife. At probably the most vulnerable time in my journey, I needed to be massaged into my role as husband – head of the home. From the Lord’s bride, I needed to hear full truth, not twisted fairytales that promote feminist ideologies (2 Tim 4:3-4). I needed a help mate.

“And ye shall know the truth, and the truth shall make you free.” John 8:32

This is why solid doctrine is so vitally important. The Lord had lifted me out of the pit, set me feet on a solid ground and Satan was there to kick me in the face (Eph 6:12; John 10:10; 1 Pet 5:8). Our pastor at the time in Bangkok set off the initial “Mutual Submission” bomb in our marriage. I returned to his office alone begging him to recant.

When tensions mounted and we were in crises of varying degrees, I escalated to a number of other pastors – all leaders of what we would call “solid doctrine” Baptist churches. Some acted fearful of my wife. Most acted arrogantly as though they had a spiritual revelation that I was not quite mature enough to grasp. From my hometown to Southeast Asia, not one pastor has stood with me against this destructive heresy. Was I missing something? After all, they were pastors; who was I to question?

Reflecting on the catastrophic impact this false teaching has had on my marriage, ministry and life, I glance back the path (Matt 7:13-14) at the vulnerable younger men coming behind me with great concern. To the best of our collective ability in Christ, we need to remove these boulders.

Now in seminary, one of my goals is to understand how the self-evident, infallible, inerrant, timeless words of God (2 Tim 3:16) are being so cunningly perverted (Matt 4) … the means by which Satan castrates sheep at the hands of their misguided shepherds (2 Pet 2:1; 2 Tim 2:26).

Bottom line – When the Bible is 100% clear on a doctrine, supported across the entire canon of scripture, don’t let a Ph.D. or pastor pervert it. Trust the Lord at His Word.

As to “the why“, there are numerous possibilities. Money is the root of all evil (1 Tim 6:10). By and large, there are many more (tithing) women in today’s churches than men. It would benefit a pastor to tell women whatever fable keeps them coming back (2 Tim 4:3-4), even if it destroys marriages over the long run. Which approach is more disrespectful to women?

Taking my past into account, could there be a double standard? Maybe they think I am “not fully a man” and therefore unworthy to be the head of my home. Can you imagine a Baptist pastor advising one of his church’s elder statesmen, ‘Now, Ernie, you know what the Bible says. The Lord would have you to follow / submit to your wife.’ ?? No, not buying it.

Or maybe my witness struck a nerve. High school bullies sometimes “end up” being the ones who secretly struggle with homosexuality. Hiding anything?

“For the time is come that judgment must begin at the house of God: and if it first begin at us, what shall the end be of them that obey not the gospel of God? And if the righteous scarcely be saved, where shall the ungodly and the sinner appear?” 1 Peter 4:17-18

“Alexander the coppersmith did me much evil: the Lord reward him according to his works” 2 Timothy 4:14

Bible trumps culture and church institutions. Stand up for Jesus, you soldiers of the cross!